Inspiration can come from anywhere, anytime! 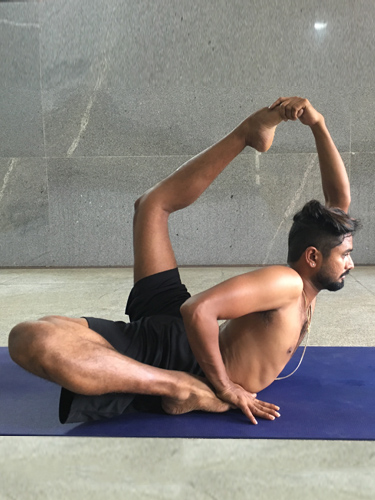 Acharya Vinay Kumar’s initiation to Yoga at the tender age of 7 years, came from watching the Olympic gymnasts performing their routines on the television at a friend’s house. The images and idea of a gymnasts’ supple movements, the flexibility struck a chord in the young boy’s mind, and he wanted to be able to perfume the various routines.

Thus, his journey of exploration and trial to improve his physical abilities with regards to flexibility and fitness began. Coming from a neighborhood that was built around the tyre industry, it was near impossible to think about gymnastics and other physical activities.
During one of his movie-watching sessions, he got to know that his neighbor was planning to send their daughter to a Yoga class. This sparked his imagination further and with the kind support of the neighbor he too got enrolled in the classes.

Vinay Kumar, the young boy took to this new form of physical activity. He was soon practicing with a senior practitioner. He was impressed with his teachers’ gentle approach and guidance provided to every student. Within a year, he was one of the best students in the Yoga class and was regularly called upon to demonstrate Yoga Asanas and participate in competitions, to spread the awareness and knowledge of Yoga to the society at large.
Typically, in those days anyone practicing Yoga was looked upon as someone with ‘some ailment’ of ‘disease’ and that Yoga was used as a therapy. Vinay Kumar’s family had to answer a lot of questions in this regard. Undeterred, he continued to perform at various gathering and functions.

His dedication and hard work led to him winning many Yoga competitions on a state and National level. This meant that Mysore and the Yoga practitioners from Mysore were getting noticed across the nation. Mysore (now Mysuru), was slowly gaining the reputation of being a Yoga hub.
Vinay Kumar’s dedication and practice were relentless, as within four years at the tender age of 13, his teacher opened a branch of his Shala and made Vinay Kumar the primary or lead teacher. He was now teaching to people across all age groups.
Encouraged by his teacher, Vinay Kumar’s Shala began gaining a reputation while continuing to win state and national competitions.

Even after 6 years of intense practice, the images of the gymnasts and their abilities to perform those routines effortlessly had not faded. His benevolent teacher once again played a defining role by introducing Vinay Kumar to the world of Pranayama. Vinay Kumar learned the importance of inhalation, exhalation and breath control which led to calming his mind. He had found his calling.

By 15 he had gained a reputation for his therapeutic approach and his ability to give individual attention to healing issues such as diabetes, arthritis, asthma, etc.

Vinay Kumar was reaching the peak of his abilities with regards to postures and alignments, and along with his success at competitions (winning 7 State and National titles), his thoughts were leading him towards learning more about the correlation between the advanced Asanas and the power of the mind. He soon realized he had that to gain control of the mind. He had to be single minded, and the temporary euphoria of winning competitions will not help. He made a decision to quit all further participation in competitions. This was another defining moment in his life.

He now concentrated fully towards developing a style of practice which would help his student practitioners achieve a sense of calm and peace. He believed that the state of mind was of paramount importance for a practitioner to gain control over emotions, develop resistance to stress, and be active. The core idea was to trigger the nervous system to prepare the practitioner for Pranayama and meditation. 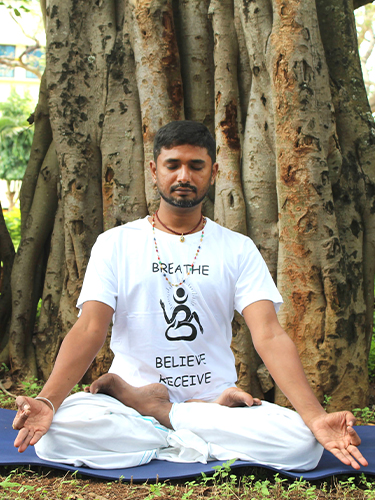 At the age of 18, Acharya Vinay Kumar introduced the self-developed sequence of Prana Vashya – The Dynamic Yoga to the practitioners at his Shala.
The journey continues…